You are here: Home / Area Guides / Region of Cataluña

When it comes to Cataluña’s international projection (politics aside), many people tend to conjure up an image of iconic Barcelona city — and not much further afield. The reality, however, is that the greater Barcelona area is just one of four provinces in the Catalan region.

The other three – Lérida (inland), Tarragona (to the south) and Girona (north) – all have their own distinctive charm and diverse attractions for travellers.

The region of Cataluña (or Catalunya in Aranese) – officially designated a “nationality” – extends from beaches along the Mediterranean to ski pistes in the Pyrenees, from classic fishing towns to mediaeval villages, and from luxury resorts to UNESCO World Heritage Sites. The sovereign micro-state (or principality) of Andorra is also on its northern border with France.

Cataluña has a magnificently sun-blessed coastline (including ultra-popular Costa Brava and Costa Dorada) and picturesque mountain havens, is celebrated for its cuisine, offers a veritable treasure trove of cultural attractions, and is a nature lover’s paradise.

Barcelona is home to the works of such internationally renowned artists as Antoni Gaudí; and its gastronomy ranges from Michelin-star restaurants serving avant-garde cuisine to traditional dishes such as pa amb tomàquet (country bread with tomato and olive oil).

Its Pyrenean and pre-Pyrenean landscapes are especially popular with snow sports enthusiasts, and the province also offers excellent opportunities for birdwatching and rural tourism. Local culinary specialities bearing the Designation of Origin label include olive oil, cheese and pears.

The coastline of Tarragona province is closely identified with the Costa Dorada tourist brand, while the actual capital city is home to another one of Cataluña’s stunning UNESCO World Heritage Sites, the Tárraco archaeological ensemble – the oldest Roman settlement on the Iberian Peninsula.

Tarragona’s gastronomic attractions are highlighted by a range of wine-related activities, especially along the Penedés Wine and Cava Route. At numerous culinary festivals throughout the year, visitors can enjoy specialities such as calçotada (grilled spring onions) and xató (cod and escarole salad).

Girona province’s exceptional beaches are part of the Costa Brava, including such internationally renowned resorts as Tossa de Mar, Cadaqués and Portlligat. The coastal landscape is also highlighted by Aigüamolls de L’Empordà and Cap de Creus nature reserves and the La Garrotxa volcanic area. Its northern borders are in the Catalan Pyrenees, with top ski resorts for snow tourism.

The province has three of surrealist painter Salvador Dalí’s most representative museums: Portlligat House-Museum, Púbol Castle and Dalí Theatre-Museum in Figueres. Main features of the local gastronomy include produce from fertile farmlands in the Empordá region and seafood from towns such as Palamós. 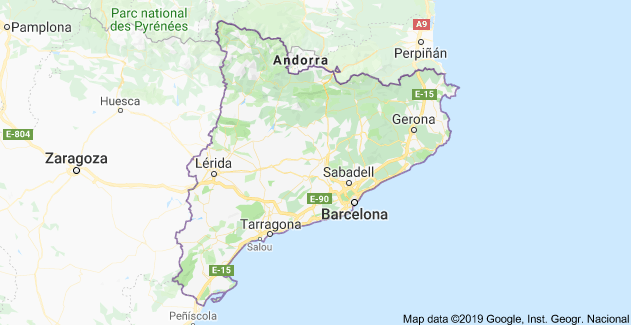