VIP guests, media representatives and other passengers were met with a ceremonial water cannon salute when they arrived on the first Emirates passenger flight to Mexico.

One of the dignitaries on the flight, which left Dubai on 9 December, was Salem Obaidalla, the airline company’s senior vice president (commercial operations, Americas), who said later, “We are excited to start a new chapter in Emirates’ history, offering a seamless connection between Dubai, Barcelona and Mexico City. We expect this service to generate high demand and enhance business, culture and leisure connections, as well as boost tourism and commerce between these markets.

“Emirates’ arrival in Mexico City via Barcelona yesterday is the culmination of a lot of planning and hard work. We would like to thank the authorities and our partners in both Spain and Mexico for their support of the new route and look forward to provide our unique product and award-winning service to travellers.” 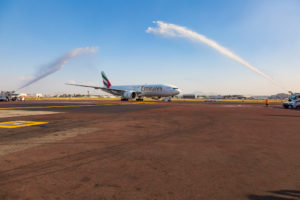 The 777-200LR aircraft offers 38 Business Class seats in a 2-2-2 layout, and 264 seats in Economy Class. The new Business Class cabin features a social area; while the Economy Class seats onboard have also been refreshed to the latest colour palette of soft greys and blues. The ergonomically designed seats come with full leather headrests that have flexible side panels and can be adjusted vertically for optimum support. The aircraft is equipped with Wi-Fi and Live TV across all classes.

Emirates flight EK 255 departs Dubai at 3.30am local time, arriving at Josep Tarradellas Barcelona-El Prat Airport at 8.00am before departing again at 9.55am and arriving in Mexico City at 4.15pm on the same day. The return flight EK256 departs Mexico City at 7.40pm local time, arriving in Barcelona the next day at 1.25pm. EK256 departs once again from Barcelona at 3.10pm bound for Dubai, arriving at 0.45am the following day. This facilitates convenient onward connections to numerous destinations in India, South East Asia and the Middle East.

Mexico City is the largest city in Mexico and the most populous in North America. Located in the Valley of Mexico at an altitude of 2,240 metres, the city is famous for its historic centre (Zocalo), a designated UNESCO World Heritage Site.

Dubai is also increasing in popularity with Mexican travellers, offering world-class shopping, Michelin-star restaurants, eclectic architecture, and iconic landmarks including the world’s tallest building (The Burj Khalifa) and one of the world’s largest malls (The Dubai Mall).

For information about other flights connecting Barcelona with the world, click here.