One summer day in 2004, an Airbus A320 named “Barceloning” took off from Barcelona-El Prat Airport en route to Ibiza. That initial take-off, on 1 July, marked the launch of a project with a clear objective, according to Vueling: “to popularise air transport and bring it closer to as many people as possible, making it more affordable and giving it a fresh, intimate and innovative image – all with a firm commitment to new technologies”.

Fifteen years later, now part of the IAG Group, Vueling has become well-established as one of Europe’s premier low-cost airlines. From 400,000 passengers and two aircraft in 2004, Vueling transported more than 32 million passengers in 2018 and operated 118 aircraft. The IAG Group currently transports one in every three travellers in the national market, leads the way for flight connections between Spain and France, and is second in connections with Italy.

Created in 2004 as a “distinctive and somewhat risky” project, Vueling is based out of Barcelona, where it has more than 60 aircraft, ensuring that the city is one of the best-connected in Europe. 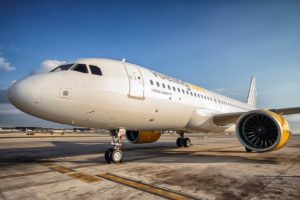 Overall, Vueling operates 120 short and medium-range destinations in Europe, northern Africa and the Middle East, with a fleet comprising 118 Airbus A319, A320, A320neo and A321 models. Expanded to a individual fleet of 17 over summer, the A32neo model combines high standards of comfort with care for the environment, offering acoustic reductions of up to 50 per cent and 15 per cent less CO2 emissions into the atmosphere.

“The confidence that our clients have placed in us throughout this time has had a major effect both from an economic point of view and in people’s lives,” says Vueling. “Compared with the 100 professionals working for the company at the end of 2004, our team now totals 4,000 people at all our bases and around 2,500 indirect employees.”

Over the past 15 years, Vueling has extended its goal of “popularising” air transport beyond the city of its origins. “Bit by bit, we have converted other cities in Spain and Europe into our home. In Bilbao we now have a fifth aircraft based there, and this same firm commitment also applies to the Balearic Islands, where we maintain a strong presence throughout the year – not only during summer – which makes us the standard-bearing airline company in the islands.

“In addition, our commitment extends to Galicia, where this year we will be strengthening our base in Santiago with a new plane; Valencia and Alicante, where we will also base a new aircraft in each city; Andalucía, where we will expand our fleet from three to four planes in Sevilla, with another five based in Málaga; and the Canary Islands, where we have operations centres in Tenerife North and Gran Canaria.”

Since 2004, Vueling has undergone several phases of development and consolidation. “In 2013, we joined the IAG group. This milestone marked the beginning of a consolidation stage that has also led us to international expansion. Our most important bases are at Rome Fiumicino Airport, where eight of our planes ‘sleep’, and in Florence, where we are leaders (with three planes from September). We also have an important operations centre in Paris, with four aircraft based at Orly Airport and another three at Charles de Gaulle.”

Currently, Vueling is immersed in the second phase of its strategic plan, Vueling NEXT. “The cornerstone are our passengers: we structure all the company’s decisions around them. To that end, one of the most important projects to date has been Vueling For You. Presented last year, this plan aims to make Vueling Europe’s number one airline in customer service, within its segment, by 2023.”

Each of the key phases for customers has been reviewed: from purchase and airport transit (pre-flight phase) to on-board experience (flight phase) – and, especially, “Moments of Truth” (customer care). “In total, a road map of more than 60 projects has been designed with the goal of making Vueling the industry’s ‘best-in-class’ through simple, clear and consistent processes.”