Wizz Air to Expand Schedule between Poland and Barcelona

Barcelona is one of three Spanish routes to be added to Wizz Air’s summer 2020 schedule for Poland. Flights from Kraków to Josep Tarradellas Barcelona-El Prat Airport are scheduled for Mondays, Wednesdays, Fridays and Sundays, starting on 1 July 2020 and costing from €19.99.

The new Spanish routes also include Warsaw to Madrid (Mondays, Wednesdays, Thursdays, Fridays and Sundays, starting on 1 June) and Warsaw to Tenerife (Tuesdays and Saturdays, from 2 June). 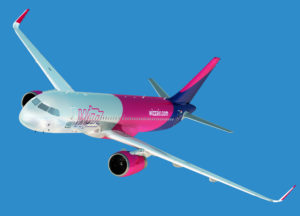 Wizz Air has announced plans to “massively expand” its Polish operations, basing four new aircraft in Poland. From summer 2020, the airline – one of Europe’s fastest growing and the largest low-cost carrier in central and eastern Europe – plans to launch 15 new routes from Gdańsk, Kraków and Warsaw, as well as increase weekly frequencies on its most popular services, adding a total of 24 incremental weekly flights to the Polish schedule.

In a news release outlining the new services, Wizz Air said its “commitment to Polish customers is underlined by the strong growth at its other seven Polish airports as well. With a network of 193 services, Wizz will have a total of 13 million seats on sale on its Polish routes in 2020, which represents 20 per cent growth year over year. Wizz’s Polish operations not only provide affordable access at Wizz’s lowest fares between Poland and the rest of Europe, but also stimulate the local job market in aviation and tourism sectors, supporting more than 8,200 jobs this year in associated industries throughout the country.”

With the latest expansion of its Polish fleet, Wizz Air will have 30 aircraft based in Poland. It currently offers 193 routes to 28 countries from nine Polish airports.

For information about other airlines and flights operating at Josep Tarradellas Barcelona-El Prat Airport, click here.